It is easy to point out the faults of others. It is easy to analyze the societal norms and ways in which we perpetrate harm on women as a unit. As a culture. What isn’t easy is admitting that in some way you are part of the problem. It is not easy to admit that despite being passionately committed to eliminating a malice that has been so ingrained in our lives that we barely see it, you yourself have succumb to these teachings in some way.

I have often been considered “one of the guys”. For the most part this is due to my love of sports and ability to use power tools. But even admitting that this makes me “one of the guys” is sexist. Another reason I fit in this bracket is because lude comments and raunchy humor come naturally to me and many people can be offended by this, but rarely “the guys”.

Moments ago I read a story on Upworthy heralding a website for supporting a woman who Tweeted about being raped. “The court of public opinion is not a court of law, and I don’t need Stoya or any woman to ‘prove’ that she has been raped for me to believe her.” Reading it was not enough so I shared the article on social media. “Begin by believing,” is a campaign tagline for New Jersey Coalition Against Sexual Assault that I find simple and powerful. So I shared with this tagline and our ambassador hashtag #NJCASAsma. This is not unusual. Daily I share news articles that support survivors or condemn perpetrators and enablers. 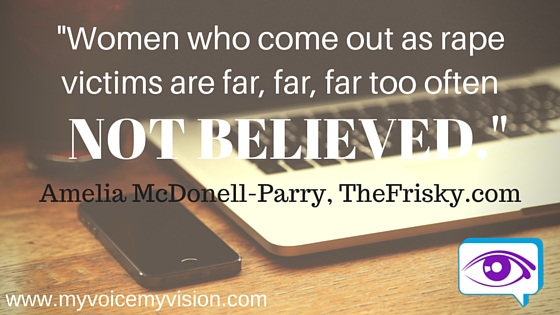 What happened shortly after made me stop and take a long hard look at myself. A friend commented jokingly on a photo that I was trying to steal his spotlight to which I replied “suck it ;)” I didn’t even consider what that phrase actually meant or implied until a couple of years ago. It was just another catchy, smart ass way to say “too bad.”

If an advocate for women’s rights, advocate for survivors of sexual and domestic violence, and woman dedicated to primary prevention of this violence can thoughtlessly make a derogatory, insinuating, and directly abusive comment how are we supposed to move forward? Well, to start I can admit that I am human and I’ve grown up being subliminally taught the same messages as everyone else. I don’t stop there though. I have to admit that I am part of the problem because language is strong and words hurt.

There was a time when I didn’t understand why calling someone a pussy was a problem. There was a time when the word “retarded” was a part of my vocabulary in a way that was disrespectful to many. I vividly remember telling one of the boys at the bus stop “you throw like a girl” when I was 11 years old. It’s messy, figuring it all out. But that doesn’t mean we should stop figuring out.

I’m not a bad person for falling prey to a cultural norm. If I didn’t see the harm in my words and if I wasn’t willing to correct it I’d be a bigger part of the problem. Instead, I admit that I am flawed and open the door for others to join me in admitting that we have opportunities for growth and that we will forgive each other along the way. What’s important is to keep going. Keep growing.