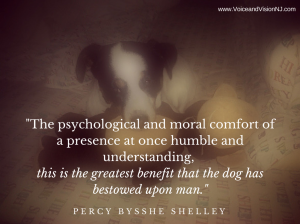 A new piece of bipartisan legislation is being considered right now that would provide domestic violence shelters money to implement pet safety programs. Aptly named, the PAWS Act (Pet and Women Safety Act of 2015) is being supported widely by domestic violence and animals rights activists.  A dozen studies have found that victims of domestic violence are more likely to stay in an abusive relationship when pets are involved because they fear for their beloved friends’ safety. How many? 18 to 48 percent of victims delay leaving to protect their pets. One Wisconsin study found that 68% of battered women reported that their abuser had harmed pets or other domestic animals in their presence or in front of their children. This bill aims to not only protect these at-risk animals but to also get women out of violent environments more quickly.

Ode to my crazy dog.

When I adopted Jack I knew that he had problems from a string of abusive homes. I hadn’t yet labeled my own relationship, my own home, as one in which abuse was taking place. I did think that having a dog might actually help us ease tensions and provide some joy to my ex and me and some much-needed love and companionship for myself. When I first brought Jack home he was not in tune with human emotions at all. In the years that would follow he would be at my side or in my lap the moment he heard my breath shutter when I was about to cry.

While my ex-husband and I were still together we would sit at opposite ends of the couch and Jack would lay between us, pressed against my leg. If my ex tried to pet him or if he came close to me Jack would give him a warning growl. On the night my ex tossed me like a pillow, spraining my knee and causing a back contusion, Jack, a 14-pound terrier mix, chased my assailant out of the house as I laid on the floor in front of an open door, unable to get up. Jack stayed by my side all night.

After our separation, my then year old son was forced by the family courts to spend time with a parent he barely. Jack would sit in the window watching and waiting until Liam came home. In the first two years of our separation, we lived on the same property, me in the carriage house at the back of the property and my ex and members of his family in the main house. To say that I was riddled with anxiety during this time is an understatement. My ex would show up on my doorstep, dark and sheltered, unannounced and often in anger. Anytime a car pulled down the drive, a door opened, or footsteps could be heard, Jack would come to attention and be ready to protect me. When it came to settling just to end the marriage, I made sure that my proposed agreement put Jack in my care. I left with next to nothing but all of the children stayed with me, including the furry ones, so I consider it a victory.

Having Jack there gave me a small and much-needed sense of safety. Having been isolated from friends and family I would sometimes go months without receiving or giving a hug to anyone other than my son. Jack was there to provide comfort and kisses that I couldn’t get anywhere else. He also bore the brunt of my frustration and impatience. Despite my sometimes pushing him away when I just couldn’t take any more kisses or wailing uncontrollably at times my son was away he still loves me. If I shed a tear, Jack is still the first one to be there to catch it. For his loyalty, I return the favor and often defend him when maybe I shouldn’t. But at a time when I felt I hadn’t a friend in the world, Jack was always there and I don’t know if I could have done it without him.