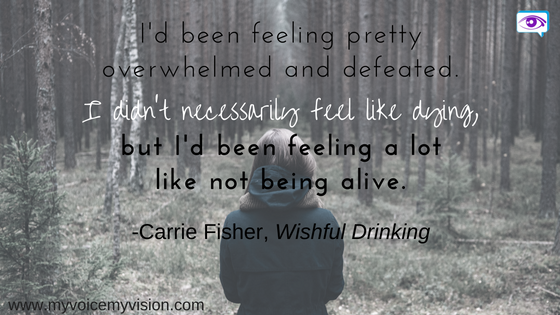 In the summer of 2002, I went through a crisis period. I was teaching at the college in my hometown when the weight of the abuse I suffered as a child came crashing down on me. I was completely consumed by “the work”. Every free minute I had was dedicated to writing, exploring, feeling. And the feelings hurt. A lot. It was me and my books. Every book I could get my hands on about childhood sexual abuse was near my bed side.

It was a harrowing time for my family. I was living with my parents, who had moved since I graduated from high school, so I didn’t feel particularly like I was home. We were in a tiny town north of the small town I grew up in. The work I was doing had a tremendous impact on my body; how it felt, how I saw it, how I moved. Everything in my life felt foreign.

In January of 2003, I was wrapping up a long choreography weekend for a production of HOW TO SUCCEED… It involved 8-10 hour days of dancing atop waxed tile on cement. I was exhausted and hurting when I sent my sister an e-card (a big deal 14 years ago) of a scarecrow who had fallen off his mount and needed to be put back together. I thought it was a funny metaphor for how I felt physically. My sister, who was living in Germany at the time, didn’t find the humor in it. She saw it as a cry for help.

I woke the next morning to my mother saying my sister was worried and wanted to talk to me. If ever there was a time to be worried about me, I assure you, I had given my family plenty of opportunities, but this, I thought, wasn’t one of them. My sister insisted I get help or she wouldn’t let me see my nieces, who were babies at the time. I, of course, thought she had lost her mind. So, when my mother joined her in her chorus of “you need help” I thought everyone had gone off the deep end. I insisted I was fine and told my mom that if she wanted me to get help she was going to have to call the cops. So she did.

I didn’t resist but I also wasn’t willing. Two officers showed up at my parents’ house and escorted me to their patrol car, where I got in the backseat and watched as the barren cornfields passed by the window for twenty miles.

Upon admission at the hospital, I was told to strip. I was searched, inside and out. All they found was a Chap Stick. This was definitely the best thing for someone recovering from sexual trauma, let me tell you. A nurse asked me to get in the shower and she proceeded to scrub me down. When she asked what a pretty girl like me had to be so upset about, I quipped “you’d be upset if your father had fucked you, too.”

If I was angry before this surely wasn’t helping to calm me. Only now I was scared, too. I didn’t know what was going to happen to me. I sat by myself in my hospital garments and hoped that no one would recognize me. On my first day, someone received ECT (electroconvulsive therapy). I felt like I was living Over the Cukoo’s Nest. A man named Andy would wander the halls, pounding his fists against the wall while he muttered and screamed words that I couldn’t comprehend. At night I could hear him wailing down the hall.

I went to group sessions where we talked about why we were in the hospital. I went to mandatory arts and crafts time and may have made a birdhouse out of popsicle sticks. To this day I do not understand how those activities are good for anyone’s mental health. I met with a psychiatrist who tried to convince me to start taking medication and I refused. He told me I wasn’t getting out until I did but he wasn’t going to force me. I didn’t trust him and envisioned being strapped to a bed while drugs were injected into my veins. I knew that I was troubled but insisted it was situational. If I wasn’t upset dealing with the trauma I was working through…then you should be concerned.

My parents (my mom and my stepdad) came to see me daily but I hated them both for “locking me up.” My mother met with me and my psychiatrist who gave me a preliminary diagnosis of post-traumatic stress disorder and bipolar I disorder. I remember him telling my mother that I did show signs of being abused as a child but “memory is plastic,” so it was hard to tell what had really happened and what I was confabulating. They talked about me like I wasn’t there, yet there I sat. I agreed to start taking medication if they would just let me go back to work.

That night I sat on the floor and stretched while we all gathered in the common room to eat popcorn and watch Rudy. I suddenly felt more at home than I ever had, like I’d found my people. Having a diagnosis, a name that went along with the pain and sleepless nights, was comforting. Maybe I did need help. Maybe with help I could start to live again, or for the first time.

I went before a judge with my doctor and nurse and was released from the hospital, under supervision of a therapist. That afternoon my mother and I went to the grocery store to fill a prescription and all I wanted was to go back. Out in the world I felt vulnerable, marked. I was certain that everyone knew I was crazy. In the hospital I felt like one of the saner ones. I knew that people were talking about me losing my mind, the way I had laughed with friends the one time I knew of someone being “sent to 3 East”, the psych ward at the local hospital. No one knew how I felt or what I was going through. I was different. There was no one I could talk to.

I was fired for not showing up for work, even though I was involuntarily committed. This left me with lots of time on my hands. I wrote a lot. And I read more. I didn’t know anyone with a mental illness. I hadn’t even heard of anyone with a mental illness except in TV shows and stories. I was surprised to learn how many incredible artists had struggled with manic depressive disorders or episodes. I was even more surprised to learn that Princess Leia had been diagnosed and treated for bipolar I disorder, and she talked about it. I found an interview where she said “I am mentally ill. I can say that. I am not ashamed of that. I survived that, I’m still surviving it.” That was all I needed.

Still determined to be an actress in 2003, I looked to Carrie Fisher as a marker of achievement. “I can do it, too,” I thought to myself. Not knowing anyone who lived with mental illness personally, I looked to books and magazine, TV interviews and clippings for some kind of connection. Without ever having met her, Carrie Fisher became my mentor.

By the time WISHFUL DRINKING came to New York in 2009, I had been off meds for several years, and my therapist thought I had been wrongfully diagnosed. I definitely had PTSD, but PTSD and bipolar disorder share a lot of the same symptoms. We kept an eye on my moods, and more importantly my functionality, without the meds. Despite struggling with a set back after I was raped in 2006, I was doing really well. I was still inspired by Carrie’s courage to speak out against stigma and give an insidious illness a face that was loved throughout the galaxy. Her wit, self-deprecating humor, and brutal honesty were traits I admire and hope to live up to. After the show I waited at the stage door, a past-time I had otherwise given up, to thank her for being there for me when I needed her most. She was gracious, warm, and joked about my needing to find a different goal (other than to be her).

I’m a Star Wars junkie. So when my son took an interest in the new Disney shows, I decided that I would show him the original trilogy. My love of Leia’s badassery was rekindled. When The Force Awakens began promoting, I talked to Liam about aging and the different standards Hollywood has for men and women. I told him how people were being mean to the actress who played Princess Leia, saying she wasn’t as pretty when she aged. Yes, I have these talks with my, then, pre-schooler. When I receive (pretend) Lego sets from my son as a gift, he proudly tells me that there is an “aging Leia Minifigure” with the set.

When The Force Awakens came out we saw a late showing that first night. I cheered when General Organa graced the screen for the first time. I have always been pissed off about “slave Leia”. She saved the fucking day and is known as “slave Leia,” but I digress. The General had lost everything by the end of that film, except for her commitment to fighting evil. Leia was a survivor. She kept going at all costs, much like the fierce actress who played her.

When a coworker shouted down the hall, the news of Carrie Fisher’s heart attack reduced me to tears at my desk. “May the Force be with you” I typed on Facebook. Whether or not the Force was with her, she is gone. The brassy voice that took no guff from anyone will never be heard again and I am grieving.

For nearly a year I have struggled to write because I am scared that my words will be used against me in court. I am certain my talk of struggle with mental illness would be a welcomed addition to opposing counsel’s litany of my offenses. I have, again, let fear silence me. Tonight though, in honor of Carrie, I can’t keep quiet. In honor of Carrie, I tell you a portion of my story. I am certain that if Carrie hadn’t had the courage to share hers with the world, mine would be significantly different.

You can make a donation #InHonorOfCarrie by visiting one of the organizations found here.