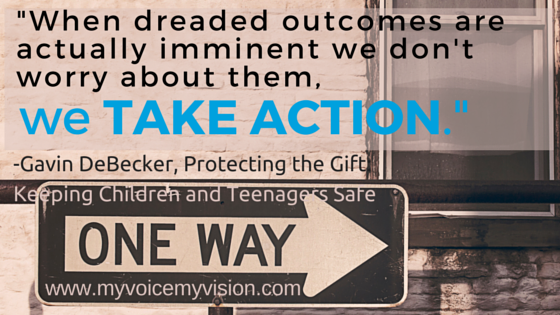 I am not a perfect mother. I am human. Very human. I do a lot right and am actually pretty proud of how I parent. The relationship my son, Liam, and I have despite all we have been through (both together and apart) is solid. I’m highly impatient at the dinner table. It drives me crazy how long it takes our chatty four-year-old to get down a little bit of pasta. It drives me even crazier that I can’t seem to stop myself from saying “Eat your dinner. Liam, eat,” for an hour every night. Maybe if I would just be quiet and leave the kid alone he would eat. Maybe not. But I digress. I will do many things wrong as a parent but if there is one thing I did right as a parent it was getting my son out of a home in which he would have grown up in fear for his safety and for mine.

Before my son was born I knew my marriage wouldn’t last. I was scared of my husband and confused by his hot and cold “love” for me. I was hurt that in front of people he seemed happy and excited in anticipation of the child I was carrying but at home, he would scream at me for ruining his life because he never wanted “any of this”. I was really unsettled and concerned by how willing he was to jeopardize the life of my unborn baby by driving recklessly or intoxicated with his pregnant wife in the car. My driving was not allowed.

By the time my baby was just a month old I knew that I had to get away but I didn’t know how. When he was four months old, I put in place a five-year plan. I applied for a bachelor’s program at Penn State University which I would do completely online so that I would be home with my son full-time during his early formative years. In three years, I would have my bachelor’s degree, then I’d do a two-year master’s program. By the time Liam was in school full-time, I would be employable and have the means to leave the hell of a marriage I was in.

When Liam was just six months old, a friend of my then sister-in-law asked me at a party  “is that the kind of man you want your son to grow up to be?” That was all it took to get me to really start thinking about it. That same weekend, a former employer (I nannied for her children) told me she wished she’d gotten out of her marriage years before and the whole family would have been better off, happier. The wheels started turning and I began to doubt my plan.

I remember my sister saying to me “he is not the end for you. There is a man out there who will love and respect you.” I started to see the light at the end of the tunnel and it wasn’t five years away. I am eternally grateful to these three women for moving me closer to a place where I could leave.

Not five year later, but seven months later I had the courage to separate from my ex-husband. It was my intention to get him into a program and to reunite our family. Shortly after, I was actually afraid for my life for the first time and I knew in my head that it was over, but held onto a sliver of hope. A month after that, I found myself in the emergency room with my 14-month-old sitting in the bed with me, making me smile through tears. That is when I knew I couldn’t let it continue and I have never looked back.

This is just a short sampling of the broad range of problems children exposed to domestic violence must face. Even if a child remains untouched, the abuse is still deeply felt.

If I never again do anything right as a parent I can rest more easily knowing that I made Liam’s life possible by leaving XN when I did. He was less than a year old when we separated. We never shared space in a room or a vehicle after Liam was two. He will never remember the insults, the cursing, or the maniacal outbursts, at least not directed at his mother. Liam will always know Mommy and Oliver together, and XN on his own. Liam will grow up in a home where responsibilities are divided, communication is free and respectful, and love and affection are distributed without hesitation or expectation. Miscommunications sometimes happen here and we don’t always agree, but respect and love will always guide this home. Practicing gratitude. Right now.

I am currently reading “The Batterer as Parent 2: Addressing the Impact of Domestic Violence on Family Dynamics” by Lundy Bancroft. I highly recommend it to all professionals dealing with domestic violence in a family court case. For parents who are struggling to make sense of it all, I highly recommend the author’s website for helpful insights into a custody battle with a batterer.